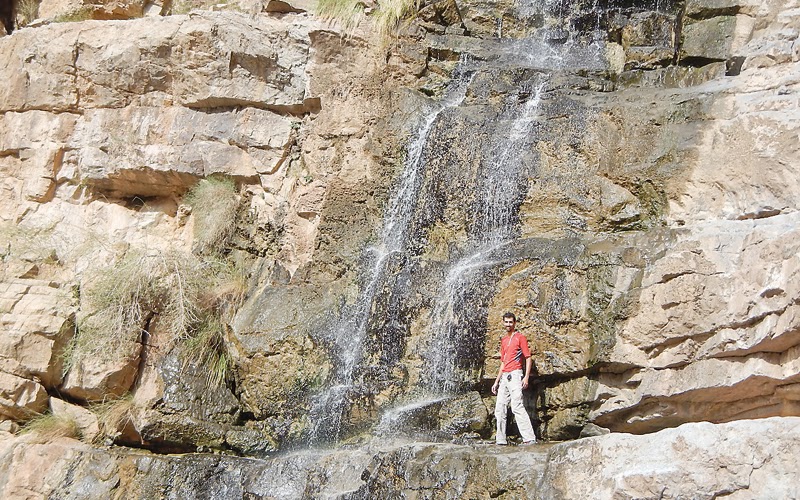 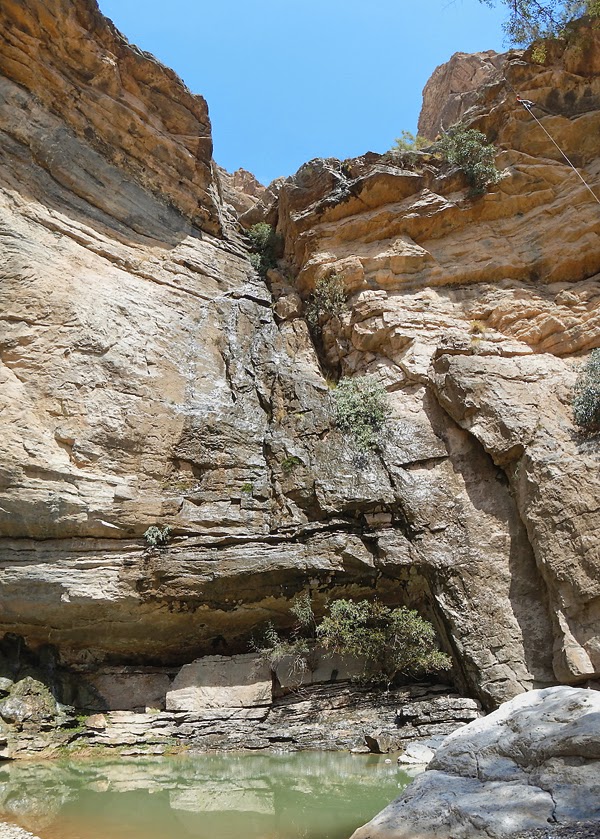 By Khaled H Abdul Malak -
kamkam@omantel.net.om -
ON April 29, 2014 we, Ahmed al Jabri aka Mismar and I, decided to start a trip in Aaqabat al Biyout in Jebel Akhdhar and reach Hillat Maqtar, one of the abandoned villages in which our older friend Musabbah al Jamudi lived once in the past.
Our expedition started following the donkey trail linking the two hamlets. Soon after we had left Aaqabat al Biyout we went down in the wadi bed leaving the trail and we started following the “waterway”.
We reached a first drop of around 50m where I already set one anchor during a previous exploration but undescended yet.
After this abseil we carried on in the wadi bed and abseiled three other descents ranging from 35m to 45m that we did already before with my family and one friend last summer.
From this point the terrain was unexplored and I knew that we had 3 more waterfalls where we had to set the anchors to abseil and progress in the canyon.
The first drop was about 40m and I had to drill and set my ring on the left side to avoid landing in the water but going through a tree instead! My calculations were good as I landed just near the pool on a dry area. We decided to have lunch at this place in the shade of a Zizifus Spina Christi aka
“Sidr” tree locally and from where we could enjoy the magnificent view of the waterfall and the springs gushing out from the base of the cliff. When we finished eating we continued our exploration and reached the next waterfall soon after.
Again I used my drill to set up an anchor and managed to encounter the pool at the bottom of the waterfall landing on a dry area. Mismar joined me and for the next drop he was the one to abseil first.
5- Ahmed al Jabri at the bottom of the last waterfallHe was standing on a platform taking some pictures when I was sliding down the last drop when suddenly he started shouting “Khaled come and see! A carpet viper!”
The snake was coiled under a rock, hiding from the sun. Ahmed managed to take few pictures of the reptile before it went away.
Hillat Maqtar was just few hundred metres away and around 15 minutes walking distance, but as it was getting late we decided to start our long and strenuous hike back to our car from the bottom of the last abseil.
It took us around 3 hours to reach Aaqabat al Biyout following the
donkey trail most of the time. Our friends from the village were waiting for us with fruits and “Suh’” (dates) and of course the Omani Qahwah (coffee).
When we were ready to leave, “The Marta Mobile” our old 4×4 (Named after my wife Marta) refused to start. Luckily our friend Khaled al Siyabi from Muscat called a friend of his from Jebel Akhdhar who came to drive us back home.
While we were waiting for the pick-up our friends from Aaqabat al Biyout served us the dinner.

Posted by Oman Visitors at 2:46 AM