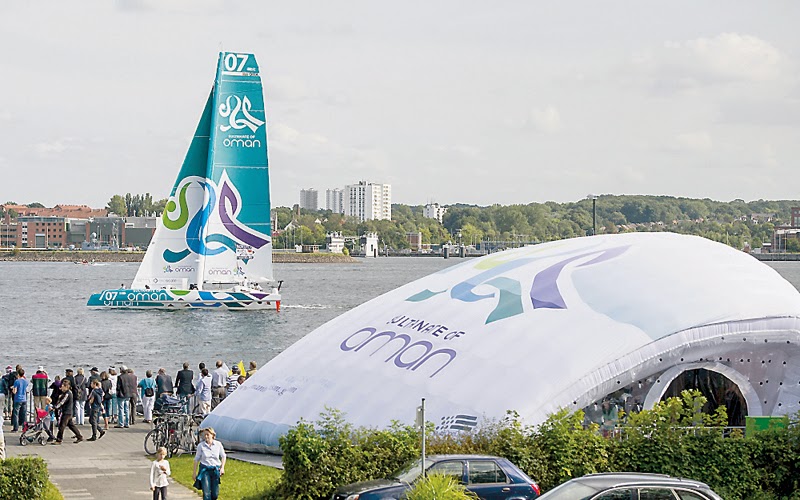 KIEL, Germany — Oman Sail’s magnificent MOD70 racing machine Musandam-Oman Sail will be flying the flag for the Sultanate in Germany next week when the mixed Omani and European sailing team takes pride of place at the world’s largest sailing event and Northern Europe’s biggest summer festival Kieler Woche (Kiel Week).Over nine days from June 21-29, the Baltic Sea port festival is expected to attract around three million visitors, guaranteeing some high volume exposure for the Omani boat which will be supported by a special shore-side exhibition to promote Oman as a premium tourist and sailing destination.Salim al Ma’amari, Director-General of Tourism Promotion at the Ministry of Tourism of Oman, said Kieler Woche offers a valuable opportunity to spread the country’s message. “Kieler Woche is one of the most important European sailing events, and one of the biggest with 3 million people expected to visit during the week-long event, in which 4,500 crew members and 1,800 boats will be competing. “The presence of the Ministry of Tourism Exhibition Pavillion and also Musandam-Oman Sail, our flagship sailing campaign, during this festival is an unparalleled opportunity for Oman to speak directly to its target tourism market.”As well as representing the Sultanate, the crew onboard Musandam-Oman Sail will be focused on setting a new record in the 28 nautical mile Welcome Race from Kiel to Eckernfoerde with a target of 2 hours 6 minutes and 50 seconds set by the SAP Extreme 40 in 2013 to beat.Ireland’s greatest sailor Damian Foxall will skipper the Oman Sail flagship in the absence of Sidney Gavignet (who is training with the M34 team for the Tour de France a la Voile) with the help of one of Oman’s star sailors Mohsin al Busaidy who in 2009 became the first Arab to sail around the world, plus two Omani sailors new to MOD70 racing Sami al Shukaili and Yassir al Rahbi.Two of Germany’s leading offshore sailors Anna-Maria Renken and Tim Kroger will also join the team for Kiel Week.